For an organization to succeed, it’s important for the leaders to take important, sometimes bold, decisions to keep the pace running. But, no human being is perfect and so errors occur even when a highly experienced expert takes the decision. These decision-making errors must be avoided if you, as a team leader, want your organization to reach greater heights in the corporate world.

What are the 5 common decision-making errors that are to be avoided and how?

There are generally three approaches that are taken to make decisions. The autocratic approach points out decisions taken by one person who has all the information and authority. The information-gathering approach is followed by a person who makes decisions when he/she feels a lack of information. A consensus approach is taken by a team. Following are given 5 common decision-making errors that need to be avoided, along with their associated solutions.

1. Overuse of one approach:

You may get success following just one approach for a number of cases. Then, you may get influenced by that particular approach and may want to implement it in other cases, too. But, not all situations are the same. This can be associated with overconfidence bias where people think of themselves as more capable than they actually are. In a study conducted in 1977, 94% of the college tutors were found to be overconfident about themselves. The solution to this error is first to focus on the goal than to perfectly analyze the situation and see which approach is demanded here. Creating a healthy team culture is always recommended.

Sometimes people assume a particular approach to be taken but in reality, another approach is getting implemented. This type of dilemma can leave people disheartened and they may lose interest. If you’re the leader, you should create some clarity, so that you can easily convince your employees which approach is appropriate here. Whether the final decision being taken by you can be fine or you need a consensus approach that has to be made very clear to all of your employees. 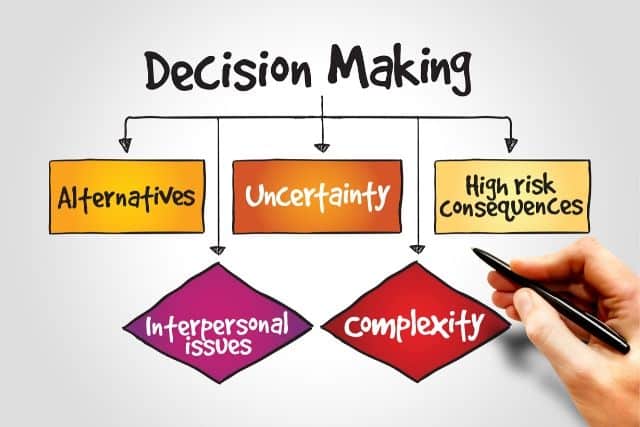 3. Assuming the existence of agreement over problems and solutions while none is there:

Debates are always welcome to create ground-breaking decisions. But over-debate can be destructive for an organization. Sometimes, it may occur that team members become silent and do not raise questions but that may not guarantee agreement. That may happen due to other reasons like fear. That should never happen in a workplace because it defies the principle of honesty. To get rid of this situation, you should create a great team culture in order to make doors for healthy debate.

4. Too much time is taken for a decision:

This is one of the most significant decision-making errors which can create an adverse impact on your organization’s future. You may suffer financial consequences. To avoid this, you should always set your target first and then the deadline to give the decision. You may try for small decisions that may lead up to the main big one.

5. Confusing debate while taking the decision:

An unhealthy debate can lead to another debate, which may be absolutely out of point. This will only waste valuable time. So, after each discussion, get the answers to some previously-set questions like ‘what we have decided?’, ‘who is going to do that?’ etc.

Decision-making errors are enough to ruin your organization as well as reputation. So, always focus on targeted goals and keeping a good team to maintain your business’s goodwill.

Things To Keep In Mind For Community Site Link Building

3 Lessons On How Promoting Sense Of Belonging Can Drive Change